Every museum in the world should have an Ability Guidebook as far as I’m concerned!  I’ll put that on my to-do list.  Until then, here’s one for the British Museum!

And in honor of their amazing staff, I want to share a little story. While Mike and I were visiting a young lady went into a series of grand mal seizures. While I timed the seizures the security guard laid down on the floor and used his body to protect the young lady from hitting any of the sharp edged cases. It was quick thinking on his part and the museum staff worked quickly to clear the area and get supports there for the young woman.  Kudos to the staff of the British Museum. 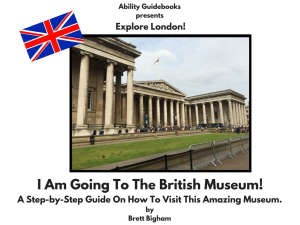 Ability Guidebook_ I Am Going To The British Museum

This is the creative website of Brett Bigham, the 2014 Oregon State Teacher of the Year. View all posts by Brett Bigham