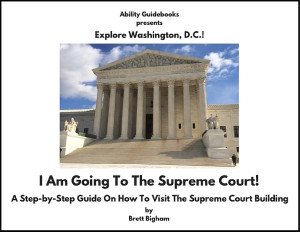 This book is all about perseverance! In 2014 Mike and I were in D.C. for the White House Honoring Ceremony.  It was an amazing week and we took every spare minute to meet with elected officials during the visit. We had a few minutes in between meeting Senator Merkley and Senator Baldwin and we decided we had time to make a book!

It was pouring down rain as we ran from the Hart Senate Building to the Supreme Court. There was over four inches of standing water in the street!  We splashed through, raced into the Supreme Court and quickly squished our way throught the building taking pictures as fast as I could.

Needless to say, the pictures turned out pretty terrible and I didn’t have the shots I needed to make a book.

Nine months later I was awarded the NEA National Award for Teaching Excellence and Mike and I found ourselves back in D.C.  I had my chance to get those pictures I needed to complete a Supreme Court Ability Guidebook! Again, the weather was none to cooperative. February snows kept us from our photo mission.

Last October I had the honor of being part of Kevin Jennings book tour for his book “One Teacher In Ten In the New Millennium.” He had accepted my essay “Teacher of the Year” for publication and I was able to travel to D.C. and L.A. for book readings. During that trip I was finally able to get the last pictures I needed at the Supreme Court.

So, finally, at last, with great happiness I present

Ability Guidebook I Am Going To The Supreme Court